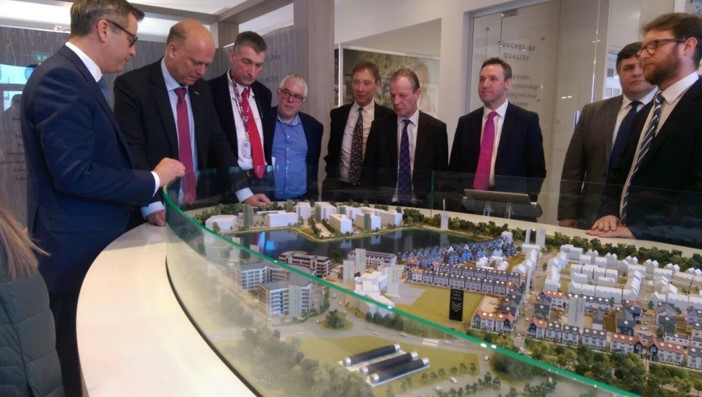 Plans for the station and wider Green Park Village development were discussed during a visit by the Transport Secretary.

A train station at Green Park will be arriving one year ahead of schedule.

The news was revealed at a meet up between the Government’s Transport Secretary Chris Grayling and Councillor Tony Page, where the pair discussed plans for Green Park Station.

Cllr Page said diesel trains would be ferrying people to their destinations via the proposed station, which would welcome trains travelling between Basingstoke and Reading at 30 minute intervals.

The station was originally scheduled to be completed in May 2020, however a scheme to electrify the railway has fallen through, meaning the project can be brought forward to summer 2019.

The Transport Secretary welcomed the plan as a vital one for the economic growth of Reading and the Thames Valley.

Mr Grayling said: “The growth around Reading and Wokingham is really important.

“Thames Valley is a really important part of the future of our economy, we’ve got to make sure that developments like this have the right infrastructure.

“What we’re going to see when the station opens is an upgrading service from this area of Reading.

“I think that’s really important in making sure that we can actually build these new houses, that we can open up options to attract more investment from international investors coming to this part of the country.

“The point about this area around Reading is it’s very good in that respect: close to Heathrow, good places to live around it, smart new developments.

“So making sure it’s got a good train service by 2020, those businesses are going to have much better connections as well.”

He said: “It’s always good to welcome government transport ministers to Reading, particularly the Secretary of State, because we have a big agenda that requires support from Government.

“The big ask is that if the Government wants more houses in the area, they have to put in money towards the essential infrastructure, because the only way you’ll convince communities in and around Reading to take extra housing is convincing them the infrastructure is in place in advance of the houses, and therefore won’t constitute additional pressure on the existing road network.

“Reading is an ideal place because we have the best bus company in the UK, we have very strong rail links, we have an ideal location in terms of Heathrow and Gatwick and those wider rail connections but that all serves existing communities.

“If you want to grow those communities you’ve go to put in more supporting infrastructure.  And that was the key message to Chris Grayling today.”

Funding for the station was agreed at a Reading Borough Council policy committee meeting on Monday, September  25, 2017.

Reading Borough Council, the Department of Transport and the  Thames Valley Berkshire Local Enterprise Partnership have all agreed to fund the £16 million project.

The Government is spending £2.3 million on the project, as part of its £16 million New Stations Fund.

Other funding will come from area development contributions (£4.6 million) and £9.15 million from the Local Enterprise Partnership.

It is hoped that the station will create up to 7,500 new jobs and 1,500 homes by providing improved access to an area that is exclusively accessible by road.