About Us - News - Thames Valley business parks continue to thrive 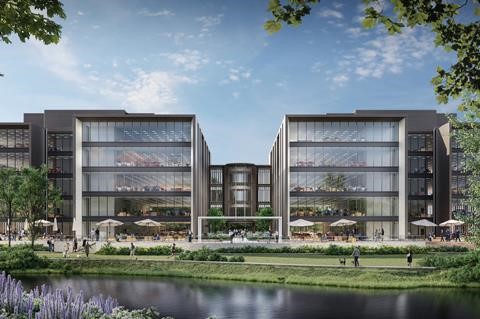 Only a few years ago, the rhetoric around business parks was decidedly negative.  Old fashioned and out of touch with the needs of modern occupiers, they were destined to lose out to town centre office schemes.

New building: Mapletree’s 400 and 450 Longwater Avenue will add stock to an ‘undersupplied market’

Look at JLL’s most recent Western Corridor stats, however, and you will see that business parks last year accounted for around half of total office take-up in the area.

In the Thames Valley, a number of business parks are thriving and continuing to expand. Property Week went to visit two of them, Oxford Business Park and Green Park near Reading, to find out the formula behind their success.

“There was talk and question marks about how sustainable the long-term demand would be for business parks,” says Duncan Campbell, director at Thames Valley specialist agency Campbell Gordon. “Those concerns were absolutely misplaced. Well-served business parks that have a cracking amenity offer and good tenants have done extremely well and will continue to do so.”

Amenities are at the centre of this business park ‘facelift’. And one park that has been leading the wellness charge over the past few years is Green Park.

Green Park, near junction 11 of the M4 motorway just outside Reading, comprises 19 office buildings and covers 195 acres – about the same land mass as Reading town centre.

Rory Carson, vice-president at Mapletree, which owns the park, doesn’t use the term ‘business park’ very often because, he says, it has some negative connotations. “When people hear the term, they think of an isolated environment, buildings isolated by swathes of car parking, no community, no real amenities and a ghost town after five in the afternoon.”

That perception, however, is changing. There are 450 events a year at Green Park, around two events for each working day. Language classes, boot-camp sessions, choir practices – you name it.

“The basics is having a decent food offer, which is always a priority. We’ve got permanent food outlets,” Carson says.

Apart from the usual restaurants and cafés, the park is served by a Deliveroo van that gathers products from different restaurants and delivers them to various places around the park. Green Park also organises street-food festivals.

“We’ve got a childcare nursery that can accommodate up to a 100 kids and a gym with a 20m swimming pool. There are dentists and a chiropractor,” Carson says. He adds that running events are another way that the park is bringing the community together. “We’re trying to make the event schedule as broad as possible to appeal to as many people as we can.”

Many events are sport focused: the boot camp, triathlons, open-water swim and nature walks. But the park also offers a number of other options, such as an open-air cinema; bee-keeping clubs (the rooftops of several buildings are equipped with beehives); book clubs; language classes; and planting workshops.

“We’re trying to bring people together, get to know each other and feel like we’re part of something bigger than a collection of buildings,” says Carson.

Coming up with the ideas that would be attractive to most of the park’s 7,000 staff is no easy task, which is why Green Park has hired lifestyle manager Nicole Coulson. The park is also using a tenants’ app called Equiem to get feedback about current activities and suggest new ones.

Green Park has an occupancy rate of more than 95%. So last year, Mapletree decided to speculatively develop two new buildings, 400 and 450 Longwater Avenue, totalling around 244,000 sq ft of office space that will be completed by the first half of next year. “We will deliver into what we anticipated to be an undersupplied market,” says Carson.

Campbell from Campbell Gordon, which is letting agent on the park and is based in Reading, says grade-A availability in the Thames Valley town is at 496,000 sq ft – down from 718,000 sq ft last year.

“That will continue to be eroded,” says Campbell. “Only two buildings in Reading town centre still have significant space to accommodate big requirements. Those are 2 Forbury Place, which has around 140,000 sq ft available, and the R+, with around 40,000 sq ft still vacant.”

Campbell claims that in his entire career, he has never seen such a low level of space available in the town centre. Occupiers will therefore be forced to look elsewhere. “We already see signs of that,” says Campbell. “Occupiers that would like to focus exclusively on Reading town centre now are considering out-of-town as an option, because of the limited supply there.”

This obviously puts Green Park and the other business parks in the Thames Valley in a good spot. “We’ve been fortunate to have a single ownership over such a large area,” says Carson. “That gives us the privilege to create the transport connections, the amenities, the community and the event schedule.”

Next year will also see completion of the new Reading Green Park station, which will connect Reading town centre and Green Park in six minutes – down from the current 15- to 20-minute bus journey.

Many of the factors that have made Green Park successful are also in evidence at Oxford Science Park, which sits on an 88-acre site on the eastern side of Oxford and is owned by Arlington.

Just as the amenities are important at Green Park, they also play a key role at Oxford Science Park. Last week, Oxfam opened its first-ever ‘superstore’ there. The charity, which has been headquartered at the park for 14 years, says the shop is an experiment aimed at changing the perception of charity shopping. With 18,500 sq ft, this hangar-style warehouse is around 12 times the size of the average Oxfam shop. It also sells products from the charity’s eco-friendly brand ‘Sourced by Oxfam’, including chocolate and coffee, bamboo coffee cups and lunchboxes.