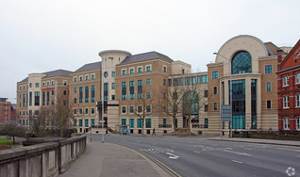 The building at 121 Kings Road was originally part of the Prudential campus and is now available as a headquarters building.

Westcore Europe bought the building in 2016 and working in partnership with Canmoor as development manager has invested more than £6m in a full refurbishment of the building, equating to nearly £100 per sq ft.

As part of the refurbishment the 70,000 sq ft building has seen the introduction of a comet chandelier and artwork in an extended reception.

The site was home to famous biscuit maker Huntley & Palmers for over 150 years.

Westcore Europe is part of the Westcore Properties group and has been active in Europe for over ten years, with representation in London, Geneva, Berlin, Amsterdam and Vienna.

Since it launched in 2000, Westcore Properties and its affiliates have acquired and managed more than $4bn in industrial and office assets, comprised of more than 750 buildings and totalling over 45m sq ft.