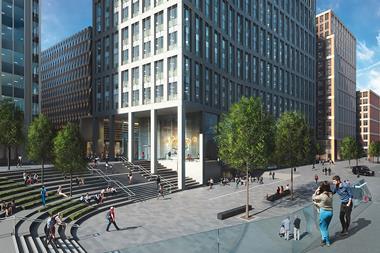 In February, when Property Week revealed that Texas-based Lincoln Property Company was in advanced negotiations to buy the Station Hill site in Reading, the news was welcomed in the Thames Valley town.

The development of the site, which is one of the largest opportunities outside London, has been a long time coming to fruition.  It is 10 years since the first planning consent was obtained.  Its owners, a joint venture between Stanhope and Benson Elliot, have planning permission for 930,000 sq ft of offices, 150,000 sq ft of retail, 450 homes and a new public square.

Irrespective of whether Lincoln updates these plans, local property experts are confident that the resulting scheme will be a success.

“It’s an absolutely cracking location, right in the heart of the action, so whatever use comes forward on it would be successful,” says Duncan Campbell, director at Reading-based firm Campbell Gordon, who advised Sir John Madejski’s Sackville Developments when it bought the site in 2005.

Sackville obtained planning permission for a series of high-rise buildings in 2008 and subsequently sold the site to the joint venture between Stanhope and Benson Elliot in 2011.  Demolition works began in 2015 but the development stalled.

Agents say there were various reasons for this but the main problem was a swell of other new office developments coming on stream.

“Stanhope did a great job but there were some challenges,” says Campbell.  “A number of other office schemes in Reading went forward, which may have caused them to ask themselves whether the time was right.”

It is a view shared by Jon Gardiner, head of Savills’ national office agency, who is joint letting agent on the scheme.  He says that a number of developments launched in recent years – including Thames Tower, R Plus, Forbury Place and the White Building – have “stolen the show”.

“Station Hill has missed its point in the cycle but that doesn’t change its strengths,” says Gardiner.  “The owners have not been able to start the development and so they have decided to exit at an acceptable price instead.”

Lincoln is buying the site, which once fully developed could be worth more than £500m, for around £70m.

Despite the challenges in bringing Station Hill to fruition, Gardiner and Campbell claim that it is the best mixed-use development opportunity in the South East.

Kim Cohen, partner at planning and design consultancy Barton Willmore, which is based in the town, says that Station Hill is “a critical piece to the continuing growth story in Reading”.

She adds: “The site has an important role to play in actively connecting key hubs of the city, in shaping its identity and in attracting investment and visitors.  The regeneration of the site comes at a great time and we eagerly wait to see what the new owner’s plans are for the site.”

It is still unknown whether Lincoln will decide to change the planning application in place and opt, for example, to develop a residential rather than mixed-use scheme.

What is clear is that the Crossrail coming to Reading in 2019, the time is right for Lincoln to bring forward the missing piece of Reading’s jigsaw puzzle.